The following text and photos are published with the permission of Jason "Hooptie J" Kennedy, the author of the legendary CyBook mod. The original information was lost, but I was able to recover his instructions with a little help from the wayback machine. Jason sent me his original photos (thank you so much)- so off we go.... 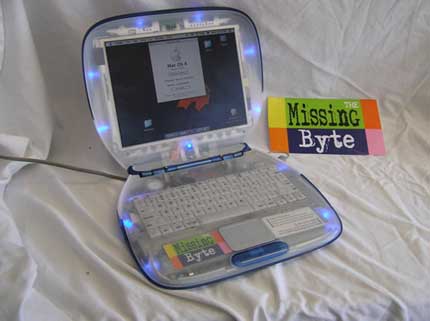 My Ultimate iBook SE, An Indigo 466SE with every add-on on you could think of !

This is a Rare iBook Indigo 466SE, Rare because it was only available to edu markets- I got the iBook from an eBay seller (locally - Score!), it was obviously a teachers model, of the hundred he had , most were 366s. Only a few were 466 models, this was the better of the 3 i had to pick from. The project started after I ordered 50 UltraBright blue LEDs for another project, and ended up with a bunch left over. 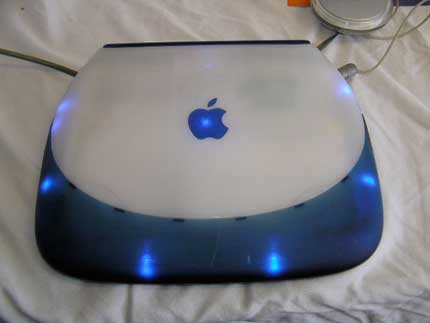 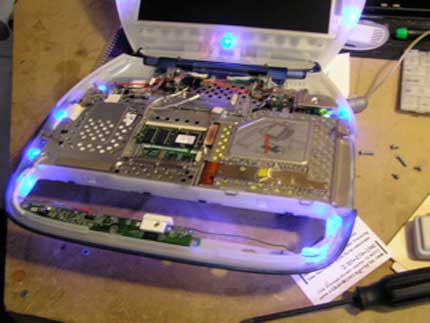 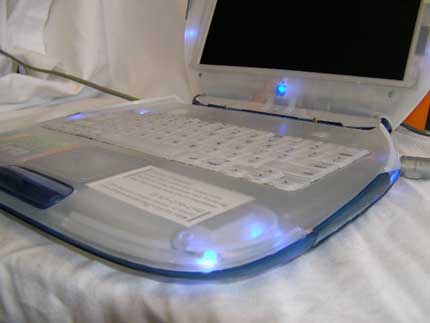 The idea I used is pretty simple, I didn't want to hurt the battery life with the LEDs, so they ONLY function while its connected to the power adaptor. The Wiring is as Follows

Lead from switch to Fuse

Fuse Connects to both Chains of 7 LEDs

Both chains of LEDs Terminate at the Negative side of the DC-IN jack.

Voila!, Re-assmble and You're LIT! 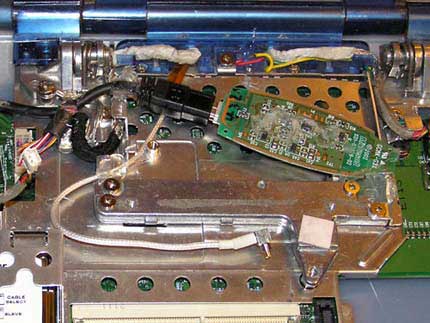 Next up, I tackled connectivity. 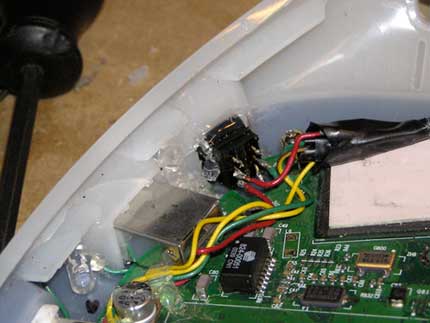 I still wanted use of the USB port so direct wiring of the Port was Out ... or was it . The Wiring is as Follows

4 wires from bottom of USB port 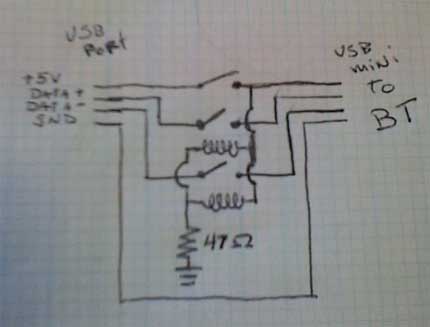 +5v from switch to USB cable

+5v to Positive side of relay coils

Neg- side of relay coils to Resistor

resistor to board ground

With The relay pack installed and wired,

the Bluetooth and the LEDs Light when the switch is ON.

When the Switch is OFF the USB port is free to be used, and the LEDS are off .

Voila! Reassemble and you have Bluetooth at the flip of a switch ! 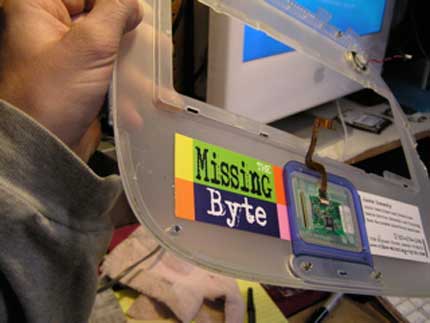 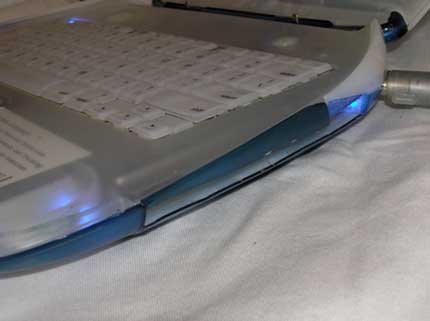 The Only other prep was the swap of the Button on the palmrest, and tossing all the shields during earlier stages.

Many websites reported that the built-in memory of Clamshell iBooks (32MB or 64 MB) can only be expanded to a maximum of 288 MB or 320 MB if you use a SO-DIMM module with 256MB. The good news is that several 512MB Modules will work with the iBook.

You should check the following things before the installation of a new RAM module:
1. Firmware upgrade installed? Firmwareupgrade 4.17f is necessary for 256MB and 512MB modules. In your System Profiler you will find you current firmware version. This upgrade needs to be installed under OS9.
2. Compatibility ? Ask your vendor if it works in a G3 iBook. Practical experience shows that most of the 512MB RAM SO-DIMMs that have 8 Chips will work.
3. Reset. The iBook manual recommends that after the installation of a new memory expansion to press  the small reset button (right above the Power button) with a paper clip, wait a few seconds and then press the Power button.

If you want a nice tuning up for your iBook Clamshell take a look at the screen mod thread (1024x768) at MacNNforums.  The main problem was to find a suitable screen/cable combination and modified in such a way that it fit the allocation of the Clamshell iBooks. Discussion in MacNNforums

This solution will be available probably only for the Firewire models with 8MB graphics. With material costs from approx. 120 euro is to count - if one decides for a used display. Correct fitting of another display in into the Clamshell housing will surely require much intuitive feeling. There is still a problem with the DVD Player.