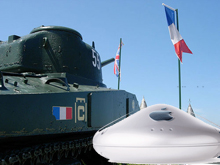 The french military was alarmed by the new wireless airport technology because their communication was based on the same 2,4GHZ band. Whoever uses Apple's new airport station risks a 30.000 Dollar fine and six months in jail - according to the National Military Bureau for Frequency Use. The wireless communication was up to then limited to a small amount of companies in the urban area, and the french army was quite alarmed by an expected fast increasing number of private users all over the country. In the first place airport cards sold in France were limited to the channels 10-13 ( USA channels 1-11).