The duration of this Video of the keynote at the Apple Expo 2000 in Paris is about one hour and twenty minutes and shows again the sales talent of Steve Jobs.

The European audience was visibly annoyed by the repeated advertising for the Apple Store on the Internet, of course, a rival to the established dealers.

You can go directly to minute 38:30 when he reveals the new Clamshell iBook models with FireWire (indigo, keylime and graphite)

According to Steve Jobs, the green keylime is the favorite color of the iBook designer Jonathan Ive and his team. The announcement that this color will be available only on the Apple online store, called protests.

The new feature that the iBook has an video output for an external TV was not mentioned.

Apple promotional video with the song by Barry White "You turned my whole world around" 1977, CD "Barry White Sings for Someone You Love", remastered, Mercury / Universal

Futurama: Hermes and the iBook

Futurama is an Emmy Award-winning animated American sitcom created by Matt Groening. Hermes is the Jamaican accountant of Planet Express. In the episode "The Problem with Popplers" he is using a Clamshell type laptop. 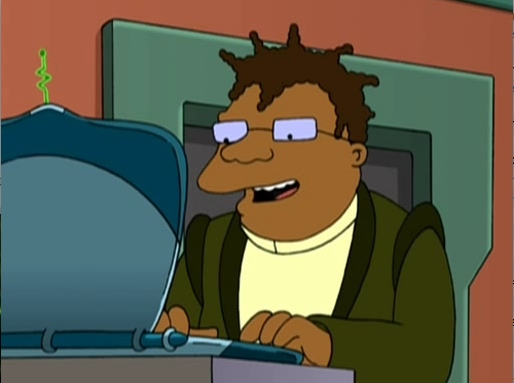