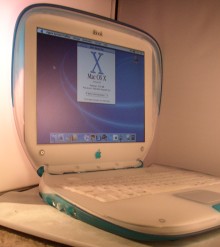 "More power!" (Tim Taylor, do-it-yourself king from the TV series Hear who's hammering) - or how to literally "drill" a 300Mhz Blueberry iBook into a Powerberry iBook.....
The last 466 iBooks not only offered more processing power, but also an improved 8MB graphics card, which was already well suited for playing DVDs - this solution offered many more options than the possible overclocking of the existing processor to 400Mhz (and the associated shorter lifespan ).

Unfortunately, the faster 466Mhz Second Edition models were only available in Graphite and Key Lime. With a bit of tinkering it's no problem to put a 466MHZ logic board into an Indigo Clamshell Firewire that was only shipped with a 366MHZ processor. However, it is more difficult to prepare the blueberry and tangerine model colors for a tune-up because there is no housing opening for the Firewire connection.

If you take a close look at a 300Mhz logic board with 4MB graphics memory that was installed in the Blueberry and Tangerine iBooks, you will see that there is already space for the Firewire port on the later models between the USB connection and the sound-out socket on the board is. At the time the first clamshell iBook was published, this feature was already being prepared, but was postponed to the next edition for cost reasons. 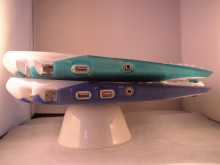 Since all clamshell iBooks are based on the same circuit board layout, all interfaces, cable connections and mounting holes are in exactly the same place. If you put two lower shells of a 300 Mhz Blueberry and a 366 indigo iBook with FireWire on top of each other, they are identical except for the cut-out for the FireWire interface. Now all you need is a 466MHz logic board, for example from a later Graphite clamshell. 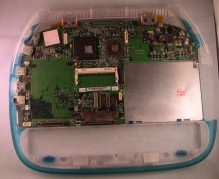 Since I still had a second lower part from a defective iBook, I dared to convert a Blueberry iBook that MacBat from the Apple Talk Forum had given me for adoption. After the cheap purchase (20 euros) of a small drilling machine with various attachments from the hardware store 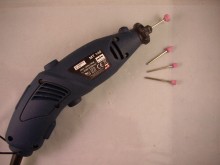 I started the surgery. First, the opening was marked and then milled out with the help of various attachments, whereby the position of the board to be installed and the accuracy of fit for the firewire cable was checked again and again.

Since the firewire connection is sunk a little in the case, there is an ugly hole that needs to be covered up. The first solution that came to my mind after looking through my inventory was to replicate a socket from a narrow rounded strip that I cut out of the unused tip of a silicon cartridge and attached with superglue.

In terms of the material and the curve, this solution harmonises well with the material of the iBook. Unfortunately, after assembly, the upper shell of the Firewire connection is a millimeter high, so that something should be milled off there beforehand. 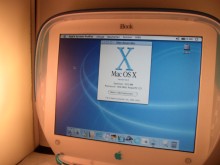 The assembly otherwise went smoothly - the Jaguar installed on the hard drive proudly reported 466Mhz. Now the Powerberry iBook is only waiting for an 80GB hard drive and a DVD drive.

When I have found a perfect solution, the next conversion is already planned - my daughter's Tangerine iBook, who needs "more power" for her Sims 1.....