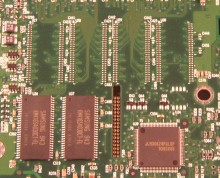 The clamshell iBook's logic board, which is based on the Unified Motherboard Architecture (UMA), still has untapped reserves: For cost reasons, initially only 32MB RAM (later 64MB RAM) was installed as main memory via a bank of 4 SAMSUNG chips (two above, two below) on the logic board soldered. Up to 512MB could be retrofitted via a free slot for a 144-pin SODIMM module.

What many people do not know: On the underside of the logic board, 4 free slots for RAM chips can be clearly seen in the circuit board layout - a resource that was kept free for another edition that was never realized.

The model color Key Lime can be derived from a citrus fruit (lime) that originally comes from Southeast Asia. You can now also find them in the US state of California, where Apple is based.

When presenting the Second Edition models at AppleExpo 2000 in Paris, Steve Jobs mentioned that key lime was the favorite color of chief designer Jonathan Ive and his team. The announcement that this seasonal color would only be sold through the Apple Store provoked protests. It was later announced that the model would also be available through dealers.

Declining value of the clamshell iBook 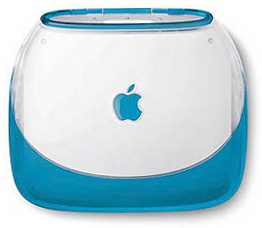 If one assumes that the iBooks in the original configuration in good condition bring in more than 200 euros when sold on Ebay, this results in an estimated loss in value of a few euros a month since 1999.

The used prices of the clamshell iBook have even been rising slightly for a few months, so that one can speak of a reversal of the trend: Anyone who has recently purchased a clamshell iBook is currently making some profit - at least theoretically - due to the cult status of the model series. 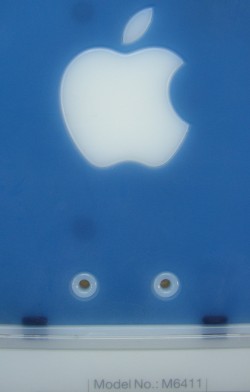 Many iBook users will wonder what the deeper meaning of the two conspicuous holes on the underside of their iBook is.

As the clamshell iBooks were also being used in classrooms, Apple designer Jonathan Ive wanted to provide a wireless alternative way to charge the battery without the UFO adapter. The idea was for a third party to offer a charging and storage station for many iBooks in a shelf form with charging pegs to match the holes. Unfortunately, I have never seen a similar product on the market.