The love for the detail shows up with the Clamshell iBook even in small things. Apple chief designer Jonathan Ive (quotation) provided for example the small green light, which signals the current energy saving mode, with gentle pulsating (instead of a mechanical on/off), which fits this sleep mode very beautifully. This detail is today still integrated in each portable Mac.

Consumer vs. Pro: Pricing of iBook and PowerBook 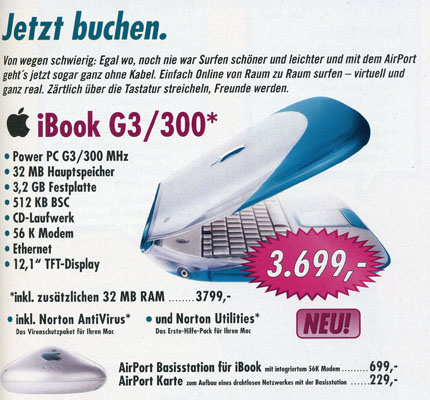 Back in 1999 the prize for Apple notebook hardware was twice as high as nowadays. In Germany the Clamshell iBook was sold for 3699 Deutsche Mark which was about $ 2020 in these days. A good deal more than $ 1599 in the USA! The picture shows a printed advertising of the distributor GRAVIS in the german magazine MacUp 10/99.

Read more: Consumer vs. Pro: Pricing of iBook and PowerBook

David Moody, Apple's director of worldwide desktop product marketing, said during his keynote speech at Macworld Expo Singapore '98: "In the first half of 1999, we will be able to show you something completely new at the portable end of the consumer space" . When Steve Jobs presented the PowerBook Lombard which was part of the professional line in May 1999 he had to put the audience off who was waiting for the new comsumer notebook: "later this year".

P1 was Apple's preliminary name of the portable computer - bMate, WebMate, eBook and iBook were most frequently mentioned names in magazines and websites. Apple Fans around the world speculated about the design which was expected a mixture of the eMate 300, the iMac and the PowerBook Wallstreet. 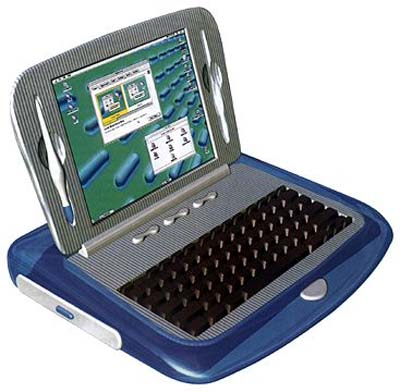 This article deals with the contents of the accessories box. Depending on the iBook Revision and country where the Clamshell was sold, some parts are included or not.
When you open the box all items are well-regulated. Let me introduce the hardware and paperwork included, the software will be reviewed in part 4 of the series. 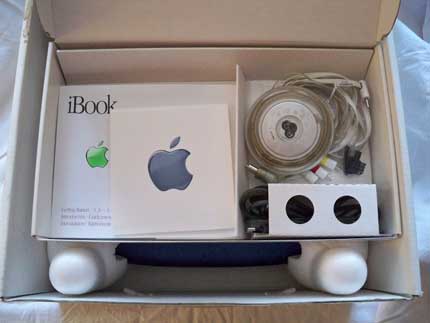