Clamshell Mod with a touchscreen

Do you know the ModBook - a MacBook modified to a full-featured Tablet PC ? In 2001, there was a similar project with the iBook clamshell called 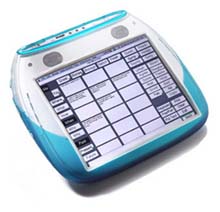 The Topcase with a built-in touchscreen display had place enough for the needed extra electronic parts, keyboard and touchpad were gone.

In the Apple discussion forum a sergeant from the U.S. Marine Corps, who was a year in Iraq reported that his vehicle was hit by a road side bomb.

He luckily survived with minor injuries-as well as his Clamshell iBook which was in its case and worked flawlessly after the incident. The ownly mark was a small crack in the case near the ethernet port.

Clamshell in the movies

Nowadays younger people will see the Clamshell iBook for the first time in movies or TV-series which were produced from 1999-2001. They are mostly in the hands of young women, e.G. Reese Witherspoon in "Legally Blonde" (2000) or Leelee Sobieski in "The Glass House" (2001).

Read more: Clamshell in the movies

Is the iBook a Girlie-Computer ? 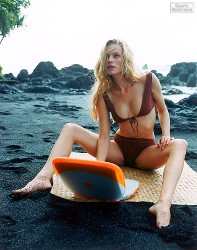 As soon as the new iBook was released in 1999, the revolutionary design met with criticism. The columnist John C. Dvorak, (PC Magazine) wrote a pamphlet which contained well known sexist stereotypes: "The only thing missing from the Apple iBook is the Barbie logo. .... You expect to see lipstick, rouge, and a tray of eye shadow inside when you open it up. You don't expect to see a 12-inch LCD; you expect to see a 12-inch mirror. No male in his right mind will be seen in public with this notebook. " Of course, Mr. Dvorak got what he deserved from female journalists and Apple fans. 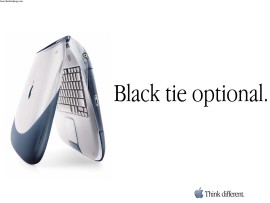 But somehow, Apple seemed to avoid more scathing criticism: in February 2000 a more serious colored iBook in graphite was released. The ad praised the clamshell as a man's business accessory (Black tie optional).
The Clamshell iBook is still an eye-catcher with its retro design, its impact on women is astonishing. Even my 12-year old daughter was thrilled about her Christmas gift - a tangerine iBook.